St. Victoria died for her faith at Abitene in Proconsular, Africa. Having been arrested for assisting at Mass, she confessed her faith before a judge in 304. She was stretched on the rack and later died in prison. Read more...

St. Josephine Bakhita
For many years, Josephine Bakhita was a slave but her spirit was always free and eventually that spirit prevailed.
Born in the Darfur region of southern Sudan, Josephine was kidnapped at the age of 7, sold into slavery and given the name Bakhita, which means fortunate. She was resold several times, finally in 1883 to Callisto Legnani, Italian consul in Khartoum, Sudan. Two years later, he took Josephine to Italy and gave her to his friend Augusto Michieli. Bakhita became babysitter to Mimmina Michieli, whom she accompanied to Venice’s Institute of the Catechumens, run by the Canossian Sisters. Josephine felt drawn to the Catholic Church. She was baptized and confirmed in 1890, taking the name Josephine. When the Michielis returned from Africa and wanted to take Mimmina and Josephine back with them, the future saint refused to go. During the ensuing court case, the Canossian Sisters and the patriarch of Venice intervened on Josephine’s behalf. The judge concluded that since slavery was illegal in Italy, she had actually been free since 1885. Josephine entered the Institute of St. Magdalene of Canossa in 1893 and made her profession three years later. The first steps toward her beatification began in 1959. She was beatified in 1992 and canonized eight years later. Read more...

Saint Moses, the Black, was a desert monk, born around 330. He was an Ethiopian of great physical strength and unruly character. Moses was a big man and his enormous strength was well known. He belonged to a band of professional thieves and robbers in Egypt.  Fearing eventual death from his Ethiopian master, or other criminals, Moses ran away into the Scete Desert. No regular people were there, only poor hermits with nothing worth stealing. The hermits converted Black Moses to Jesus; yet his former bad ways held on to him. In order to fight harder for Jesus, Moses moved further into the desert.  He was chosen for priesthood, and at his ordination the bishop remarked to him, "Now the black man is made white". Moses replied, "Only outside, for God knows I am all black within." St. Moses The Black feast day is August 28th. Read more...

On May 16, 1962, Pope John XXIII made Martin de Porres the first black American saint. Born on December 9, 1579, in Lima, Peru, de Porres was the illegitimate son of Don Juan de Porres of Burgos a Spanish nobleman, and Ana Velasquez, a young freed Negro slave girl. From early childhood Martin showed great piety, a deep love for all God's Creatures and a passionate devotion to Our Lady. At the age of 11 he took a job as a servant in the Dominican priory and performed the work with such devotion that he was called "the saint of the broom".  Martin was placed in charge of the Dominican's infirmary where he became known for his tender care of the sick and for his spectacular cures. In recognition of his fame and his deep devotion, his superiors dropped the stipulation that "no black person may be received to the holy habit or profession of our order" and Martin was vested in the full habit and took the solemn vows as a Dominican brother. He established an orphanage and a children's hospital for the poor children of the slums. He set up a shelter for the stray cats and dogs and nursed them back to health. Many miraculous cures, including the raising of the dead, were attributed to Brother Martin. Today throughout South America, Central America and the islands of the Caribbean, people tell of the miraculous powers of St. Martin de Porres. Read more...

St. Benedict the Moor was born in Sicily in 1526. He was the son of African slave parents, but he was freed at an early age. When about twenty-one he was insulted because of his color, but his patient and dignified bearing caused a group of Franciscan hermits who witnessed the incident to invite him to join their group. He became their leader. In 1564 he joined the Franciscan friary in Palermo and worked in the kitchen until 1578, when he was chosen superior of the group. He was known for his power to read people's minds and held the nickname of the "Holy Moor". Read more... 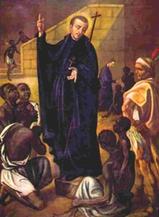 Once declared the second American born saint, and although she was not of African descent, St. Katharine Drexel, the foundress of the Sisters of the Blessed Sacrament, dedicated her life to the defense and promotion of Native and African Americans. Her story is unique given her background of power and privilege and wealth. Her family was part of the social and economic elite of America. Her father, Francis Anthony Drexel, shared ownership of an international banking empire, Drexel Burnham Lambert. Katharine's concern for the "Colored people" paralleled her concern for the Indians. Katharine purchased a sixteen hundred acre tract on the James River near Richmond, Virginia, where she established St. Emma's Industrial and Agricultural Institute for young black men. On a piece of the land adjoining it, she had a school for black girls built, and named it St. Francis DeSales. Katharine's crowning achievement was the Building of Xavier University in New Orleans, the first U.S. Catholic institution of higher education for African-Americans. The constant demand for Mother Katharine finally caught up with her. In 1935, she suffered a heart attack and after that rarely left the Motherhouse in Philadelphia. Coupled with a life of contemplation, she continued to fight for civil rights, funding some of the NAACP's investigations of the exploitation of black workers, and organizing letter-writing campaigns to President Franklin Roosevelt. Read more...

St. Anthony the Great of Thebes

​​St. Anthony is called the Patriarch of Monks. He was born at Aama, village south of Memphis, near Thebes. His parents were rich Christians. Shortly after inheriting his parents' fortune, he sold all his vast fortune and gave the proceeds to the poor, sent his sister to a nunnery and retired to an old ruin of a tomb. He ate only every three or four days and spent his time at manual labor and prayer. The memorial day of St. Anthony is celebrated on January 17. Read more...
(Image Attribution: Francisco de Zurbarán, Public domain, via Wikimedia Commons)

St. Monica, an African laywoman is a saint with whom most black women can readily and easily identify, because Monica epitomized the present-day black women. St. Monica was born in Tegaste in northern Africa in about 331. She was a devout Christian and an obedient disciple of St. Ambrose. Through her patience, gentleness and prayers, she converted her pagan husband. To her son, St. Augustine of Hippo, whom she loved dearly, she gave thorough religious training during his boyhood, only to know the disappointment of seeing him later scorn all religion and live a life of disrepute. Before her death, Monica had the great joy of knowing that Augustine had returned to God and was using all his energies to build Christ's Church, and that her youngest daughter had become a nun. St. Monica's feast day is August 27th. Read more... 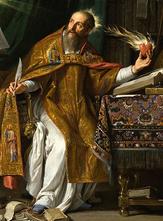 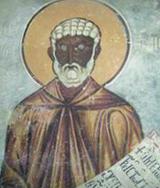 ​​Saint Peter Claver, S.J.,was a Spanish Jesuit priest and missionary who was born in Verdú (Catalonia) and although not of African descent, became the patron saint of slaves, the Republic of Colombia and ministry to African Americans due to his devotion and care of enslaved people. During the 40 years of his ministry in Colombia it is estimated he personally baptized around 300,000 people. He is also patron saint for seafarers. He is considered a heroic example of what should be the Christian praxis of love and of the exercise of human rights. Read more... 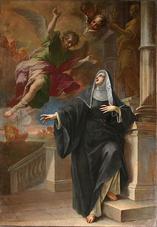 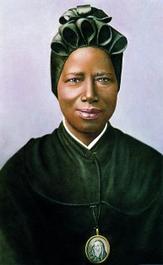 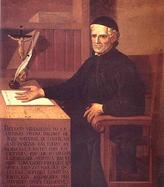 Antonio Vieria was an African born in Portugal. When he was fifteen years old, he became a Jesuit novice and later a professor of rhetoric and dogmatic theology. He went to Brazil where he worked to abolish discrimination against Jewish merchants, to abolish slavery, and to alleviate conditions among the poor. Fr. Antonio Vieria has not been canonized.​ Read more...

Bessarion was a native of Egypt, and having heard the call to perfection he went into the wilderness, where he was a disciple first of St. Antony and then of St. Macarius. Rather than live under a roof he wandered about like a bird, observing silence and subduing his flesh by mighty fasting. His neighborly charity led him to a height of perfection that was manifested by miracles: he made saltwater fresh, he several times brought rain during drought, he walked on the Nile, he overcame demons. Like so many other desert fathers, St. Bessarion lived to a great age; and he was compared by his admirers with Moses, Joshua, Elias, and John the Baptist. St. Bessarion is named in the Roman Martyrology on June 17th, but his usual date in the East is June 6th. Read more... 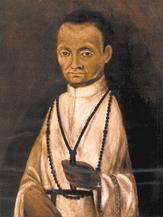 Augustine the sinner is all too well known. Known as a convert and author of Confessions, little is known of him as Father of the Church and as a saint. His thousands of letters, sermons and tracts, combined with 232 books, instructed the Early Church and have relevance for the Church today. It is said that Christian scholars through the ages owe much to St. Augustine and that the full impact of his psychology and his embryonic theology will be felt in years to come. Augustine lived an austere life, performing great acts of mortification and penance. He wrote, "I pray to God, weeping almost daily." His memorial day is celebrated on August 28. Read more... 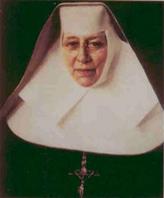 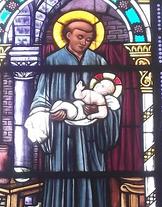 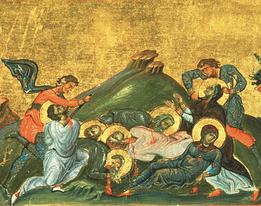 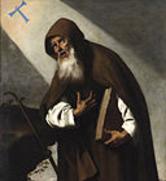 Women were persecuted for practicing Christianity at Carthage. Perpetua is recorded for having several visions that depicted her death. At death, she called out to the crowds: "Stand fast in the Faith and love one another. Do not let out suffering be a stumbling block to you…" Felicitas was Perpetua's slave. They died together. Sts. Perpetua and Felicity are the patron saints of mothers, expectant mothers, ranchers and butchers. Their feast day is celebrated on March 7. Read more...