From the Former President
of the NBCC
Most Reverend John H. Ricard, SSJ

Mural designer and artist, Enzo Selvaggi and his family pictured standing next to Bishop Joseph Perry.

Congress XII​
The Spirit of the Lord is Upon Me:
act justly, love goodness, and walk humbly with your God.

The Congress XII Mural
The mural artwork is available for use to NBCC affiliates, limited to not-for-profit use. Image must include the following copyright:
​Heritage Liturgical © 2017​

With profound gratitude, I write to express my thanks to those who worked on behalf of, or those who came to be counted among, the attendees of the National Black Congress XII event which took place in Orlando, Florida from 6-9 July 2017.
This historical gathering of Black Catholics and those who minister within the African American Apostolate was an outstanding witness and affirmation of our Catholic faith and of our faith in each other.  The response to the call to once more meet as a group of Black Catholics was heartwarming, and the response embodied through the presence of so many of you was overwhelming. I received many comments from attendees who expressed joy and gratitude at seeing so many present and had the satisfaction of hearing both their hopes and wishes, as well as their challenges and concerns, addressed and shared with many like minded brothers and sisters from all over the country.
I wish to express my personal thanks to the NBCC staff, especially Valerie Washington and Kimberley Hefner, as well as the dozens of volunteers who gave generously of their time and efforts for many months of discussion and planning to bring this event about.  These included not only experts in music and liturgy from almost all parts of the United States, but also Ralph McCloud and Donna Grimes of the USCCB, who helped in the development of social policies and programs; Sr. Callista Robinson and Sr. Patricia Chappell, both offering their expertise in education; and Fr. Raymond Harris and Sr. Gwynette Proctor, who convened to help develop an agenda, which was by all measures, well received and welcomed. To all of them I am profoundly grateful.
I would like to highlight some numbers which illustrate the level of success which the participants enjoyed.
There were over 2000 registered participants. Of that number:

A separate track was held for youth, and was directed by Howard Roberts and emceed by Seminarian Kingsley Ogbuji.
The event was featured in reports by the Catholic News Service, and was subsequently picked up by most diocesan newspapers. 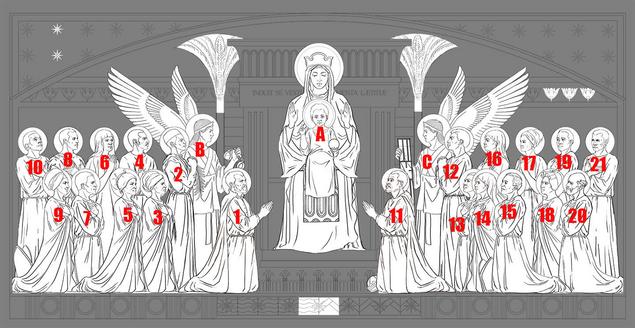 ​About the artist and the concept for the mural ​

I wish to express my gratitude to all of you for making the Congress XII event, “The Spirit of the Lord is Upon Me: act justly, love goodness, and walk humbly with your God,” which occurred last month in Orlando, Florida, an overwhelmingly successful event.
From the seemingly insignificant details to those large events that defined the spirit of the gathering, I am confident that you will agree with me that Congress XII was affirming, rewarding and timely.
However, since Congress XII, we have witnessed events in Charlottesville, Virginia and other parts of the country. We have witnessed the response of the leadership of our country to these events. It is very clear that it is incumbent on us to take those steps that we dared dream about and envisioned during Congress XII. We must implement and realize this vision of Congress in our Church and society, which was given to us by Christ in His Gospel. The vision of a Church and community which is open to all and to which all are affirmed.
Having listened carefully to the attendees’ responses and the calls for leadership, as well as continued discussions about a meaningful follow-up to the vision of Orlando, we are laying out some of the steps that we will be taking in the days and months ahead.

2.    The United States Conference of Catholic Bishops’ Pastoral Letter on Racism, which is being developed and presented to them at their November 2018 meeting.  We can provide support to this important and long anticipated message by taking the initiative to read and reflect upon it, and then by engaging in the efforts to implement its vision (to be outlined in its study guide).

Scripture on altar translates to: “She took off her widow’s garb to raise up the afflicted in Israel.” – Judith 16:7.

Rectangular graphic at bottom is a stylized version of the crest of Bishop John Ricard, SSJ.  The waves represent the Water of Life and the zig-zagged line represents a carpenter’s staff; both are Josephite images.

The stars in the blue field at the top represent the saints, the flower stalks are Congolese, and the Magnolia blooms refer the the Stono River Basin in South Carolina. 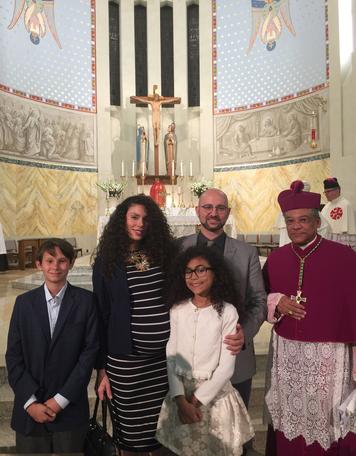 Dear Brothers and Sisters in Christ,

​Enzo Selvaggi is a Californian artist and designer who led the team of artists that produced the mural of the Black Madonna placed in the Liturgy Room for the 2017 NBCC.

The mural is painted in the Beuronese style, and when Enzo was asked why he chose to do so, he replied, “The Beuronese style offers a special opportunity for sacred art in the New Evangelization because it proposes a universal compositional substructure of harmony, rhythm, and symmetry.  Upon this substructure a fluid hieratic symbolism can be seamlessly grafted. That symbolism can take many forms, focusing on a particular doctrinal, historic, cultural, or ethnic perspective.” Enzo added, “The Beuronese style is named named after the Benedictine Abbey in Beuron, Germany and was developed by a monk, Desiderius Lentz, at the end of the 19th century.”

In the mural for the National Black Catholic Congress of 2017, a heavenly court of representative Black saints is the focus.  Men and women of varied hue, tongue, nation and era are depicted as they worship the Christ child, Himself enthroned in the loving and nurturing embrace of the Blessed Virgin, the Seat of Wisdom. The words, “she took up the garments of joy” calls to mind the book of Judith, in that great song of praise for the redemption of the children of Israel -- proclaiming their freedom from  the bonds of a cruel and powerful opressor.

Enzo also described the persons represented in the mural, aside from the Madonna, “as the depicted saints who come from divers states of life, many are canonized, some are blessed, and some are neither -- underscoring the universal call to holiness which the Church has communicated to her children since her founding, and reiterated emphatically by the Second Vatican Council.” Some notable persons would be: St. Charles Lwanga and Venerable Henriette Delille among those officially recognised by Rome. Daniel Rudd, Thea Bowman and Cyprian Davis help represent those who are well known for their holiness and contribution to the Church, but not yet officially.

Highlights of the event also included special greetings from Pope Francis to Congress XII attendees presented by the Papal Nuncio, Archbishop Christophe Pierre, who was present for the entire event.
We were also blessed by the keynote address of His Eminence, Peter Kodwo Cardinal Turkson, head of the Vatican’s Dicastery for Promoting Integral Human Development and President of the Vatican Office of Justice and Peace, who also was present during the entire event.
I offer special thanks to Fr. Claude Williams, a Norbertine priest of the Diocese of Orange, California, for his efforts in originating the concept, creation, and development of the beautiful mural that hung above the altar during the on-site liturgies. Information about the art and its availability will soon be available on the NBCC webpage.
While most of us were enjoying the many features of the Congress event, Fr. Steven Thorne, a priest of the Archdiocese of Philadelphia, was quietly meeting with a select group of Congress participants chosen beforehand by their bishops. They were set with the task of developing the framework of a Pastoral Plan, which they will continue to develop and which will be available in a few months.
Before and during the event Ms. Tonya Dorsey of the Archdiocese of Philadelphia worked tirelessly in developing the musical program, composed of a variety of musical genres, including the contributions of most contemporary, as well as classical, African American and African Catholic composers and musicians.  Ms. Dorsey also developed and conducted a mass choir which greatly enriched the entire experience.
In this time following Congress XII, it will be up to us to respond to those challenges that were laid out for us by the keynote speakers and the workshop presenters, and through the soon-to-be-completed Congress XII Pastoral Plan.
In his address to us, Pope Francis urges “that the Congress … confirm[s] America’s Black Catholics in their evangelical commitment to the pursuit of justice and human dignity, while encouraging a deeper reflection on our common baptismal calling to be missionary disciples, sent to the farthest reaches of society to draw hearts and souls to the transforming love of Christ the Savior.”
Again, my deepest thanks to everyone who made this event one which, I am confident, will be enshrined in our memory for years to come.

Very sincerely yours in Christ,

3.    The development of the Congress website, (www.nbccongress.org) to assist with offering guidance and direction. Following a process that was developed before Congress XII, the NBCC will announce a series of webinars that will explore a wide variety of issues, especially those that were highlighted at Congress XII in Orlando. These webinars will be a forum for further discussion and development of the issues.
The topics may include the following:
Mass Incarceration. What does it mean?  What are its effects on the Black community, the Black family and Black employment?  What are some positive steps we can take at the local, state and national levels?
Domestic Violence.  When and why does it happen? How can we prevent it from happening?  What are its particular effects on Black family life?  What response is best from individuals and parishes to address it?   What steps can we take now?
Youth and Young Adults.  Where are they as we look at Sunday Mass and parish activities?  How can we develop more welcoming parishes?
Developing Black Spirituality.  Beginning with the African American Catholic Youth Bible, we need to continue to explore the use of symbolic language and culture that directly affect the everyday lives of Black Catholics.
Social Justice.  Why it is important to secure and preserve rights and responsibilities for people pushed to the margins. How can we advocate for issues that affect African American people in disproportionately adverse ways? What national issues are on the horizon that require our attention, i.e. voter suppression, housing, and education?
The Bishops’ Ad Hoc Committee Against Racism. Congress will begin to explore ways to offer consultation and support to this new and timely committee of the USCCB.

4.    Offering a Series of Seminars and Workshops.  These will be directed to the clergy, consecrated religious, and to the laity.
​
These are the steps that we will take at this time.  We welcome your suggestions of any additional steps that should or could be taken. Please respond to this letter using the form below, or directly to the Congress office.