Theme:The Spirit of the Lord is Upon Me: act justly, love goodness, and walk humbly with your God.

Congress XII brought Black Catholics together in a celebration of outstanding witness and affirmation of our Catholic faith and of our faith in each other.  Many attendees expressed joy and gratitude at seeing so many present and had the satisfaction of hearing both their hopes and wishes, as well as their challenges and concerns, addressed and shared with many like minded brothers and sisters from all over the country.

Highlights of the event included special greetings from Pope Francis to Congress XII attendees presented by the Papal Nuncio, Archbishop Christophe Pierre.  Attendees were blessed by the keynote address of His Eminence, Peter Kodwo Cardinal Turkson, head of the Vatican’s Dicastery for Promoting Integral Human Development and President of the Vatican Office of Justice and Peace, who also was present during the entire event.

Congress XI celebrated 25 years of gathering together as a Congress of Black Catholics in modern times. This celebration of "What We Have Seen and Heard" brought the power of the Spirit to renew and strengthen the bond of Christian love that exists between us all.

As so many in the Black Catholic community still struggle with the oppressive burdens of unemployment, inadequate housing, poverty and violence; the tragic legacy of the prevailing racism which still exists in society today. The Good News of the gospel brings hope and strength to go on with the struggle, until the life and dignity of every person in the community is respected and honored.

The vision for Congress X was to help Black Catholics articulate how the sacraments and the sacramental life, as gifts from Christ, are connected to our contribution to the Church and the world through our Core Principles, which were developed at Congress IX as an expression of our proclamation of the Gospel.

The celebration of the sacraments, and our understanding of the Church as a sacrament, is a constitutive part of the proclamation of the Gospel. If we cannot relate these gifts from Christ to our Core Principles, then we are missing a fundamental element of our Catholic Faith. If we do not appreciate the gifts that we have received from Christ, then we are in danger of taking them for granted - something we cannot afford to do, as it is Christ who is acting in these sacramental celebrations.

Congress IX, the fourth Congress in modern times, was assembled to provide to a wide population from across the United States, and to brothers and sisters from the African Continent and Brazil, an opportunity to discuss a Declaration of Principles which were formed to lead us to Action in ministry. This Congress served as an important event which helped to strengthen leadership skills and develop linkages so that all that who minister do so in Solidarity with those dedicated to serving persons of African descent in every community.

All who attended the Congress were motivated to return to their home dioceses and parishes on fire for the Lord and prepared to do His work in spreading the Good News.

​Theme:What we have seen and heard - We proclaim
and celebrate.

The eighth National Black Catholic Congress convened in Baltimore; the last Congress in the 20th Century, and a coming home celebration since the last Congress in the 19th Century was also held in Baltimore. Some 3,500 people gathered "to witness among leaders who share our spiritual heritage and life experiences, to see the church living what she articulates and to fellowship among Catholics who are proud to be like us."

One of the outstanding innovations at Congress VIII was the introduction of "Word Events" which proclaimed the good news of Jesus Christ through drama, music, dance, storytelling, role-playing and visual arts. Another highlight was the pilgrimage and dedication of "Our Mother of Africa Chapel" at the Basilica of the National Shrine of the Immaculate Conception in Washington, DC.

Most Reverend John Ricard, President of the National Black Catholic Congress, opened the gathering by stating: "We're a small voice crying in the wilderness. But if we work at it, our voices will reverberate beyond the Catholic church. As a church, this is the most effective way we can respond to the challenges of our times. Our delegates must be responsible for addressing the development of a diocesan and parish structure to ensure that definite activities are planned, monitored and evaluated to result in the strengthening of the African-American family."

Recommendations resulting from the Congress focused on creating a unified national family policy and other social policies that would eliminate the disparity between families living and poverty and those in higher socio-economic levels.

This Congress, held on the campus of the Catholic University of America, opened with a look at the strides made by Black Catholics in the United States. From the ordination of Bishop Joseph Perry in 1966 to that day, May 21, 1987, when 1500 Black Catholics assembled for a discussion on evangelizing to their brothers and sisters.

Sr. Francesca Thompson spoke of Black Identity, saying "I define Black power as Black freedom. Black self-determination, and Black pride, wherein, we as a people no loner view ourselves as without human dignity but men and women whole...with a God-given ability to carve our our own destiny."

Little documentation was provided on this Congress. Below is an excerpt from the address of Dr. William Lofton, President of the Congress, to the assembly. Lofton stated: "We hope to hail the day ... when the American people, the hierarchy of the Catholic Church, and the laity shall rise up in their might and stamp out the prejudice which is today destroying the life's blood of the country.

The purpose of this Congress was to address important issues such as discriminatory actions in Catholic Schools, questions regarding whether the Negro should return to Africa and the establishment of separate schools and churches for blacks. Approval was also given the the newly created St. Peter Claver's Catholic Union. The closing mass was attended by more than
​5,000 people.

The third Black Catholic Congress was tasked with drawing up a constitution for permanent organization. The Congress went on record as favoring "education of the races" as well as supporting the provisions of the Brussels Treaty against slave trade in Africa.

The second Black Catholic Congress issued a call for the establishment of an Industrial School. In addition, the Congress demanded the abolition of the slave trade in Africa. In his address to the Congress, Dr. William Lofton of Washington, DC stated "the most imperative need is education."

In his address to the first Black Catholic Congress, William H. Smith stated, "Truth is the strongest armor a person can possess, and we are told 'You shall know the truth, and truth shall make you free. Our object is, or should be, the truth.' "

Two-hundred delegates met with President Grover Cleveland, and Rev. Augustus Tolton celebrated High Mass. One point on the agenda was the recognition of women's roles in evangelization. The resolution was also made "That we express our sympathy with our bretheren of the Emerald Isle, who like ourselves are struggling for justice." 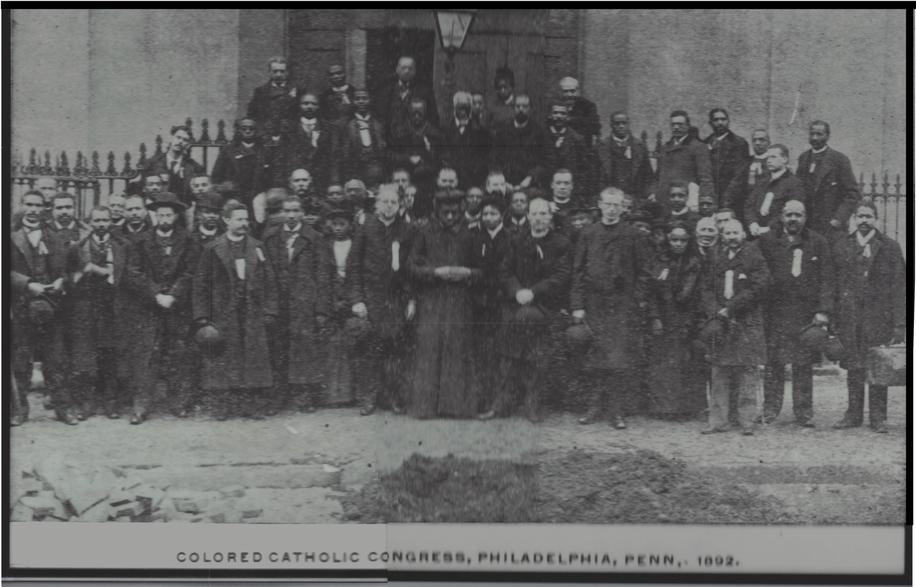 This is an original photo from the first Colored Catholic Congress held in Philadelphia in 1892. Pictured in the middle of the front row is Fr. Augustus Tolton, the first recognized Black Catholic priest in the United States.

Synopses of the guiding themes of past Congresses