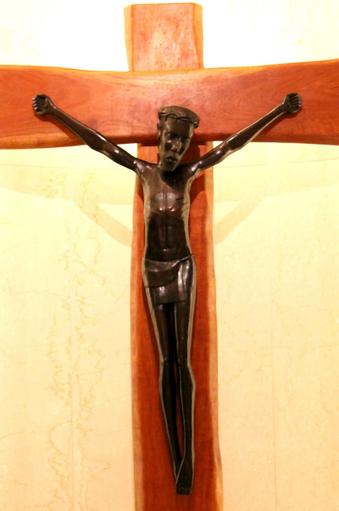 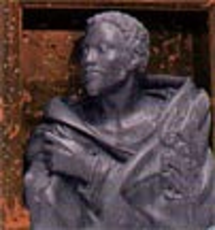 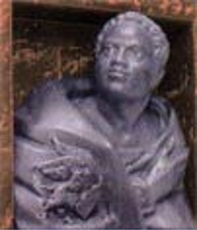 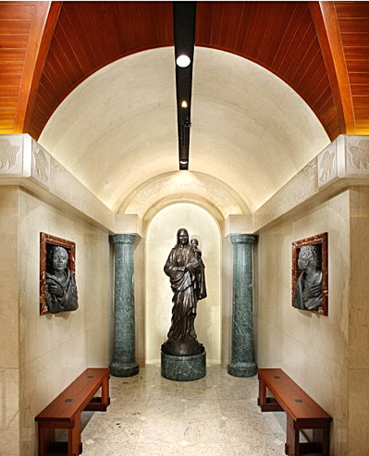 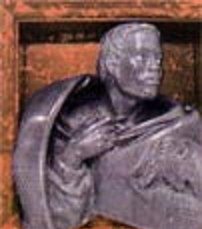 Our Mother of Africa, holding the Christ Child, looks down upon us. She strides forward toward the narrative relief in the nave, and her Divine Son gestures for us to read the relief, which spans the African American experience from slavery to emancipation.

The Chapel Entrance
The columns within the chapel that support the vault symbolize the seven family values of African American people, Nguzo Saba.

The words for the seven principles that constitute the foundations of African American society Nguzo Saba, were taken from the non-tribal Kiswahili language, so that people of different African tribes could communicate with each other:

Summarizing the African American value system, they serve as guides to daily living.

art pieces in the Chapel — Our Mother of Africa in bronze, our ancestors in the bas Relief Panel in bronze and the crucified Christ, carved from Ebony Wood, on the Cross.

The Four Evangelists
These sculptures (below) with distinct African features, of Matthew, Mark, Luke, & John, the four evangelists from the New Testament, are carved in gray Bardiglio marble. Each of the Evangelists created by sculptors Giancarlo Biagi and Jill Burkee have become represented symbolically by one of the creatures described in the Book of Ezekiel 1:4-5 and in the Book of Revelation 4:7.

Our Mother of Africa Chapel

The Basilica of the National Shrine of the Immaculate Conception

Our Mother of Africa Chapel

The sculpture program is the work of different artists and designers who combine romantic, classical, realist, and geometric forms to celebrate the sacred conversation in Our Mother of Africa Chapel.

​Giancarlo Biagi, born in Pietrasanta, Italy, is a graduate of the Stagio Stagi art school and apprenticed at the Tommasi Foundry. He moved to the United States in 1974 and maintains studios in New York and Italy. Since 1976, he has collaborated on many projects with the artist Jill Burkee, working exclusively on commissions. On occasions, he participates in exhibitions, and has had several solo exhibitions. Commissions over the last ten years include projects for the Basilica of the National Shrine of the Immaculate Conception in Washington, DC, The Human Services Center of Denver, Colorado, and Mary, Queen of the Universe Shrine in Orlando, Florida.

Jeffrey Brosk earned a master’s degree in architecture from the Massachusetts Institute of Technology studied painting and sculpture there, and has combined the sister arts of painting, sculpture, and architecture ever since in his wall sculpture and in his outdoor constructions. He maintains a studio in New York City.

Jill Burkee, a native of Colorado, attended the University of Washington, and in 1975 received a travel grant to Italy. In 1976, she formed a working partnership with Giancarlo Biagi, and they have worked exclusively on commissions, both private and public. The most recent commissions include marble sculpture of Our Mother of Africa Chapel at the National Shrine in Washington, DC. a bronze relief mural for the Human Service Center of Denver, and the mosaic and bronze portals for Mary, Queen of the Universe Shrine in Orlando, Florida.​

Ed Dwight studied art at the Kansas City Art Institute and the University of Denver. He served as a pilot and engineer in the United States Air Force for thirteen years, then worked in aeronautical and construction engineering before turning to sculpture full-time in 1978. He maintains a studio and foundry in Denver, Colorado.

Juvenal Kaliki is the principal wood carver in the town of Morogaro in Tanzania. He works with a school of wood carvers in this ancient village, which is part of the Entebene tribe.

Jean Wiart is founder of the United States subsidiary in Paterson, New Jersey, of Les Metalliers Champenois, S.A., of Reims, France. LMC specializes in fine architectural metalwork and historic restoration. Wiart is a Master Artisan and member of Les Compagnons du Duvoir, whose origins lie in the medieval guild tradition in France. Born in Cambria, he studied with the guild and in his family's black smith workshop. The recipient of several prestigious awards in France, he also distinguished himself in New York with such projects as the fabrication of the torch for Liberty Enlightening the World (the Statue of Liberty) in 1984, restoration of the dome of the Old Police Building, creation of the copper dome for Brooklyn's City Hall, and restoration and gilding of the General William Tecumseh Sherman Monument in Central Park.

The Narrative Relief
Sculptor Ed Dwight created the statue of Our Mother of Africa and Divine Son and the narrative relief on the wall of the nave, which celebrates the African American experience. The artist renders Mary and the Infant Jesus with idealized African American features.

​In Dwight’s relief (above), which reads from right to left toward the altar and the crucifix, the figures at the beginning

of the narrative are rendered in low relief, which makes them seem to merge from the bronze background. As the journey toward emancipation progresses, the relief becomes higher, the figures more three dimensional, and the space they occupy more realistic, which not only animates the narrative but also intimately involves the spectator in the African American journey — a tableau of frozen movement.

art historian, author, and lecturer, is Adjunct Professor of Art History at Columbia University and

Director of The Monuments Conservatory. 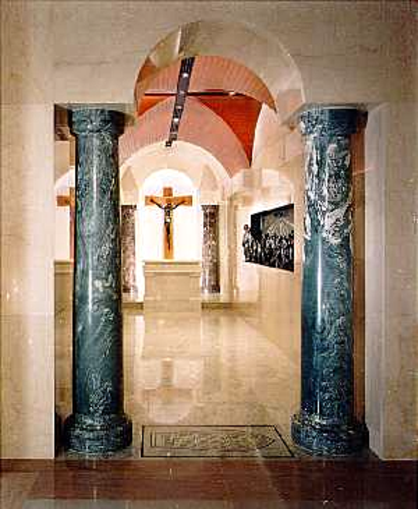 At the Annunciation, Mary accepted the angel’s invitation to become the Mother of God. Because she cooperated in giving the Redeemer to the world, the Church has taught that Mary represented the redeemed human race at that moment when she said, “Behold the handmaid of the Lord; be it done unto me according to Thy word” (Luke 1:38).

Basilica of the National Shrine of the Immaculate Conception

The crucifix was created through the collaboration of the Tanzanian sculptor Juvenal Kaliki and the New York sculptor Jeffrey Brosk.  Kaliki carved the figure of Christ, and Brosk designed the cross. Kaliki has carved the figure of Christ in ebony, a black hardwood, appropriate to the African American theme of the sacred conversation and compatible with Ed Dwight’s African American Mother of Africa and Christ Child.​  Jeffrey Brosk’s cross was hewn in cherry wood. He has retained the irregularity of the bark surfaces and natural curves of the tree, organic forms which act as foils to Kaliki’s geometric carving of the figure of Christ.

The crucifix is suspended in the chapel above the altar and appropriately illuminated to emphasize its preeminence in the sacred conversation. 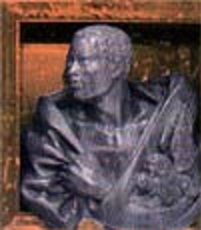 Mary’s mediating role in this sacred drama is uniquely embodied in the African American experience and eloquently expressed in the sculpture program of Our Mother of Africa Chapel.